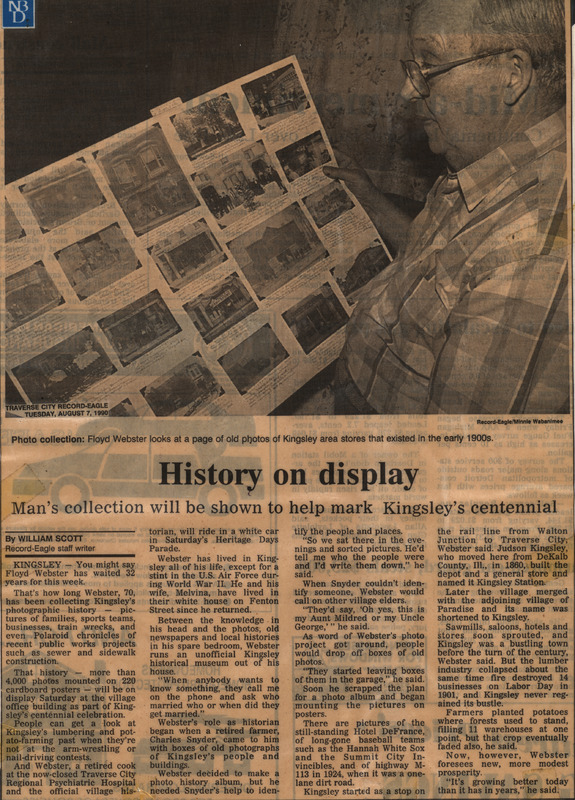 "History on display", 7 August 1990. Newspaper article about Kingsley historian Floyd Webster, who donated the images for the current digital collection to the Kingsley Branch Library over a period of years. Article appeared in the Traverse City Record-Eagle on August 7, 1990.

This image may be protected by copyright law. Contact the Kingsley Branch Library for permission to reproduce, display or transmit this image.

KINGSLEY- You might say Floyd Webster has waited 32 years for this week.
That’s how long Webster, 70, has been collecting Kingsley’s photographic history- pictures of families, sports teams, businesses, train wrecks, and even Polaroid chronicles of recent public works projects such as sewer and sidewalk construction.
That history- more than 4,000 photos mounted on 220 cardboard posters- will be on display Saturday at the village office building as part of Kingsley’s centennial celebration.
People can get a look at Kingsley’s lumbering and potato-farming past when they’re not at the arm-wrestling or nail-driving contests.
And Webster, a retired cook at the now-closed Traverse City Regional Psychiatric Hospital and the official village historian, will ride in a white car in Saturday’s Heritage Days Parade.
Webster has lived in Kingsley all of his life, except for a stint in the U.S. Air Force during World War II. He and his wife, Melvina, have lived in their white house on Fenton Street since he returned.
Between the knowledge in his head and the photos, old newspapers and local histories in his spare bedroom, Webster runs an unofficial Kingsley historical museum out of his house.
“When anybody wants to know something, they call me on the phone and ask who married who or when did they get married.”
Webster’s role as historian began when a retired farmer, Charles Snyder, came to him with boxes of old photographs of Kingsley’s people and buildings.
Webster decided to make a photo history album, but he needed Snyder’s help to identify the people and places.
“So we sat there in the evenings and sorted pictures. He’d tell me who the people were and I’d write them down,” he said.
When Snyder couldn’t identify someone, Webster would call on other village elders.
“They’d say, “Oh yes, this is my Aunt Mildred or my Uncle George,” he said.
As word of Webster’s photo project got around, people would drop off boxes of old photos.
“They started leaving boxes of them in the garage,” he said.
Soon he scrapped the plan for a photo album and began mounting the pictures on posters.
There are pictures of the still-standing Hotel DeFrance, of long-gone baseball teams such as the Hannah White Sox and the Summit City Invincibles, and of highway M-113 in 1924, when it was a one-lane dirt road.
Kingsley started as a stop on the rail line from Walton Junction to Traverse City, Webster said. Judson Kingsley, who moved here from DeKalb County, Ill., in 1860, built the depot and a general store and named it Kingsley Station.
Later the village merged with the adjoining village of Paradise and its name was shortened to Kingsley.
Sawmills, saloons, hotels and stores soon sprouted, and Kingsley was a bustling town before the turn of the century, Webster said. But the lumber industry collapsed about the same time fire destroyed 14 businesses on Labor Day in 1901, and Kingsley never regained its bustle.
Farmers planted potatoes where forests used to stand, filling 11 warehouses at one point, but that crop eventually faded also, he said.
Now, however, Webster foresees new, more modest prosperity.
“It’s growing better today than it has in years,” he said.

This item has no relations.